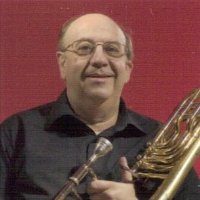 Alwyn Green studied at London’s Guildhall School of Music and Drama under Professor Denis Wick, for a degree in music with trombone and euphonium as his major instruments. He won the brass prize in his second year and was also awarded external diplomas from the Royal Academy of Music in trombone performance and Trinity College of Music in euphonium performance and teaching.

He was a founder member of the Prince of Wales Brass and the Palm Court Theatre Orchestra, and in 1999 he formed the Berkley Salon Ensemble with colleagues from the CBSO.

As a composer and arranger he has had a number of works published, and many of them have also been broadcast or recorded. He has arranged music for film, including for Eric Morecambe’s last film “The Passionate Pilgrim” also starring Tom Baker and Madeline Smith. Alwyn taught Bass Trombone and Brass Band Scoring and Arranging at the Birmingham Conservatoire and Birmingham University for many years, and is still invited back to take classes. He plays a major role in the CBSO education programme and his arrangements are used regularly by the Orchestra.

A well known figure in the Brass Band world, Alwyn learned to play in the Salvation Army at Norwich Citadel, becoming Young Peoples Band leader, before his professional life took him away. He has been Musical Director of numerous Brass bands including Poole and Winton Bournemouth SA bands, and the Downton and Shirley Bands. He has been guest conductor or Musical Director with many bands including Sovereign, Lydbrook, City of Coventry, Foresters 2000, Bedworth and West Mercia Police. He has also made solo appearances with SA and Contesting Bands too numerous to mention, as well as working with the likes of Eric Ball, Ken Downie, James Shepherd and Richard Phillips.