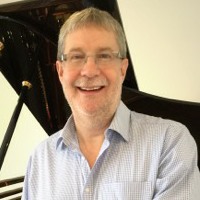 Andy Meyers studied conducting and piano at Trinity College of Music and he gained an MA (Music Education) with distinction from the University of Surrey.

He has worked in master classes with Diego Masson and Sir Charles Groves and in 1983 he was awarded the Ricordi Prize for conducting.  He has conducted orchestras ranging from the Enfield String Players to the London Festival Ballet and he has been the musical director of the Kingston Chamber Orchestra since 1988.

In 1985 he was a prize-winner in the Stroud International Composers Competition with his Sonata for Oboe and Piano and he was the runner-up in the 2005 BBC Radio 4 Christmas Carol Competition.

He has written a number of orchestral works including the sinfonietta Concertante and concertos for flute, bassoon, recorder and bass clarinet.  His programmatic work Orion for solo horn and orchestra was premiered in 2012 by the leading British horn player, Richard Watkins.

Andy was Head of Music at Finton House School, Wandsworth for twenty years and he is now Director of Music at Homefield Preparatory School in Sutton and the conducting Tutor at Kingston University.

He has written an enormous amount of educational music: songs and carols, music for brass, school orchestra & band and a substantial range of recorder music for players at all levels.