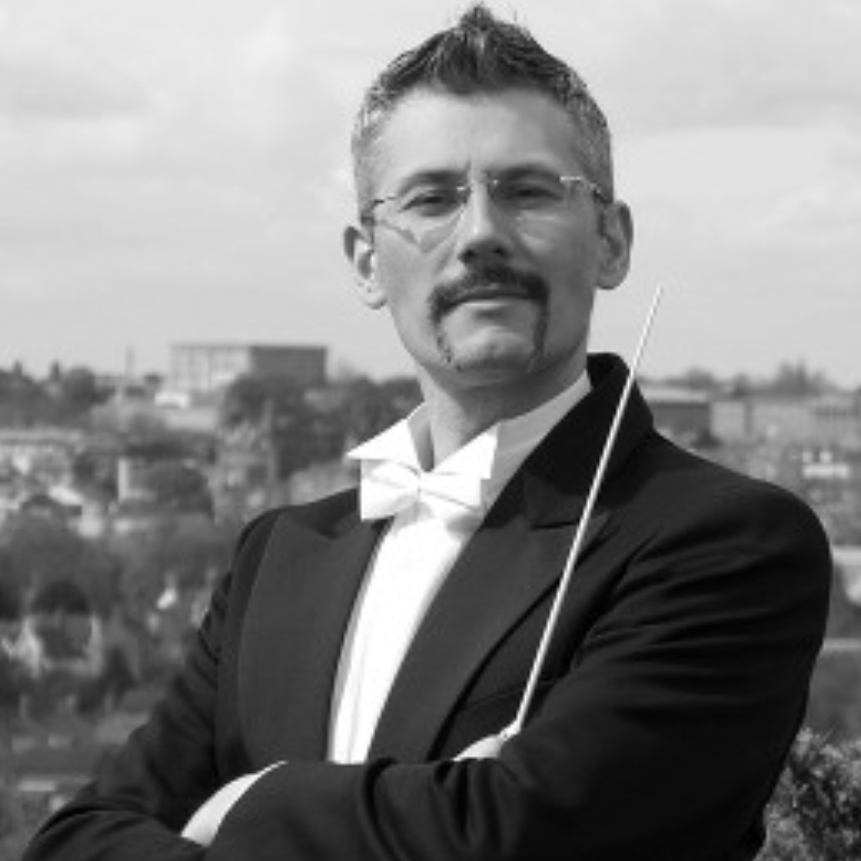 Dario Salvi was born in Brescia, Northern Italy and began studying soprano saxophone at a very early age with the Philarmonica S.Cecilia in his home-town of Sarezzo.

As a teenager he was much in demand with Concert and Big bands as saxophonist, clarinettist and arranger. It was at this time that Dario developed a love for the bass guitar, however he was too busy playing the sax to dedicate enough time to the bass.

Dario joined the army and became Deputy Bandmaster of the Tridentina Regimental Band of The Alpine Troops. In the late 1990’s he trained as Bandmaster and began studying the art of conducting and music theory, as well as learning about the military music tradition. The band is made up of German and Italian-speaking musicians based in South Tyrol, a former part of the Austro-Hungarian Empire, and it was there that he was first exposed to, and fell in love with Austrian music.

After having studied jazz harmony and modern music theory and becoming a professional bass player, he has toured and played with international artists at large festivals all over Europe and the USA.

Dario began conducting in Italy in 2006 and has been Musical Director for Banda San Gottardo di Barghe, Corpo Musicale di Vestone, Corpo Musicale di Serle and Banda Choros, a professional concert band composed of some of the best players and conductors from bands based in Northern Italy.

After graduating with Honours in Applied Psychology from the University of Derby on a distance learning course, Dario moved to England in 2011 to read for a Masters Degree in Conducting. He has worked with Chamber Orchestra Anglia and the University of East Anglia Symphony Orchestra both conducting, and arranging music for the orchestras and their ensembles.

Soon after graduating with a MMus he founded the Imperial Vienna Orchestra, composed of some of the best musicians in the East of England and is proud to bring a new approach to classical music to the UK.

As a member of the Johann Strauss Society of Great Britain he has been very active in arranging new music from the Viennese Archives for orchestras, quartets and military bands. Of note is his work on the completion of ‘Lily Waltz’ by Johann Strauss III, which is the last ever title from the Strauss family. In 2015 he was awarded Honorary Life Membership by the Society.

The Vienna-based Original C.M. Ziehrer Orchestra uses his services regularly for their recordings.

With the Imperial Vienna Orchestra, Salvi mainly performs his arrangements of Viennese Music, some of which are not available to the general public in recorded form. This makes every concert a rare occasion to listen to works which have great musical and historical relevance.

With IVO he has been able to work on other pieces that are not traditionally associated with Viennese music, including works by Schubert, Schumann and Busoni, as well as composers from other geographical areas like Grieg, Verdi, Offenbach, Ketelbey, Coates and Mendelssohn. Dario has a keen eye on Viennese Operetta and is bringing premiere performances of works by Genée, Suppé, Millöcher, Fahrbach and Johann Strauss II to the UK.

Currently he is busy working in collaboration with the Johann Strauss Society of Great Britain and the University of Wisconsin (USA) on a performance of Suppé’s 1883 operetta ‘A Trip To Africa’ (Die Afrikareise). His work includes arranging the parts and scores and supplying a translation of the original German text into English when the text has been lost from the last performance literature, which was in an early 20th Century American production. In addition to this he is using the original promptbooks and dialogue in order to supply a complete work to Opera Houses all over the world.

Dario Salvi is currently the Musical Director for Hellesdon and Sprowston Brass Band and composes and arranges for Brass Band.