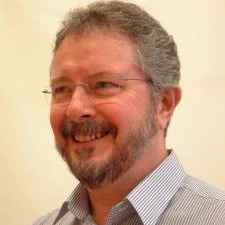 Geoff Davidson studied at the Royal Scottish Academy of Music, where he graduated with honours in singing and piano and took part in master-classes with Sir Adrian Boult and James Loughran. For seven years he was a member of the BBC Singers, touring extensively and appearing as a soloist in London’s major venues, and working with some of the world’s great conductors. He has acted as chorus-master for Sir John Eliot-Gardiner and the world-famous Monteverdi Choir, and conducted several choirs including the Alexandra Choir of London, and the London University Choral Society.

He is a composer and arranger and has worked in a vast range of musical styles from Bach to Broadway. He taught singing at Jesus College, Cambridge, and the University of East Anglia, and has sung in a diversity of concerts over the years which have included; Sir John Eliot Gardiner’s Bach pilgrimage in 2000, a world premiere of Sir Peter Maxwell-Davies ‘Canticum Canticorum’, as well as countless appearances as ‘Star’ singer on BBC Radio 2’s ‘Friday Night is Music Night’. His BBC broadcasts have included an astonishing variety of music, from English lute songs, to works by Britten and Schumann.

Two CDs of Burns songs arranged by him were acclaimed by the Scottish press.

Geoff is the co-founder, Musical Director and compère of the Norwich Pops Orchestra, and directs the Mid-Norfolk Singers and North Norfolk Chamber Opera.

Recently Geoff has turned more and more to composing, and has produced two chamber operas, a Magnificat and several anthems for children.