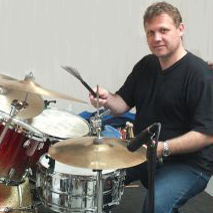 Kevin’s musical career began at school, where he was initially introduced to the Eb tenor horn, before learning to play the French horn. During that time, he was fortunate to pursue his growing enthusiasm for drums and percussion, and expand his range of instruments to include piano, bass, keyboards and vocals.

Kevin’s musical experience encompasses a broad range of musical styles and genres from Classical to Jazz, Brass and Wind ensembles to Funk and Rock. He has performed for more than thirty years in the area of musical theatre s well as on numerous commercial recordings and TV advertisements.

He is much in demand as Musical Director for large scale productions and has directed shows including ‘Cabaret’ and Barry Manilow’s ‘Copacabana’.

Kevin’s musical passion is for arranging and composing, having studied under Jack Hamner of Berklee College of Music (USA). His orchestrations have been performed at the Royal Albert Hall, The Purcell Rooms and numerous other prestigious venues around the world.

In recent years Kevin has specialised in composing and recording music and sound effects for theme parks and attractions around the world. His work has been featured in the National ‘Sealife’ Centre in the UK, and ‘Sealife’ Centres in Ireland and France as well as the London, York, Edinburgh and Hamburg Dungeon Attractions.Kevin has also composed and recorded the music for Santapark in Finland as well as theme parks including Alton Towers, Chessington World of Adventures and Thorpe Park.

In between performing, composing and arranging music in a variety of areas including Brass Band, Concert and Big Band (swing band), Kevin also teaches percussion.