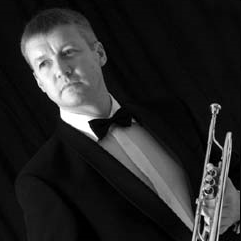 Leigh began his musical life at the age of 11 when school friends auditioned for the school band, but he wasn’t good enough!

Not to be outdone, he persisted, playing ‘G’ trombone for a week before his Welsh teacher told him to ‘put it back in the box, boy’. A battered old baritone was too heavy to carry home and it ‘didn’t play the tune’ so to the cornet he went.

At age 12 he joined Poulton-le-Fylde Brass Band; but where to put him ……..? A bit too good for 3rd or 2nd slot but definitely not good enough for Rep?

So he found himself right in the middle of the front row with a massive learning curve to follow. Luckily he was sitting between 4 superb and experienced musicians who were always there to lend a helping hand, put up with all the missed key changes and the invariable “where are we?”

Leigh joined the Army for a ‘couple of years’ at age 16, eventually spending 29 years, having served at the illustrious Royal Military School of Music, Kneller Hall, with ‘The Royal Artillery Band and Orchestra’, ‘The Band of the Parachute Regiment’, ‘The Band of the Army Air Corps’ and finally as a commissioned officer in the role of Director of Music for ‘The Band of the Dragoon Guards’.

Musical tours included Malaysia and Singapore, Cyprus, Kenya, Gibraltar, Pakistan and countless to Europe. Even operational tours to Northern Ireland and Iraq did little to dampen the enthusiasm.

‘The last few of years have seen quite a dramatic shift in my life with the transition from leaving the Army as well as personal challenges but I am lucky to have the time and wherewithal to be able to continue the one thing with which I am truly comfortable……..making music to an appreciative audience. I love being involved in various musical ensembles including playing, conducting and arranging for Cawston Brass Band and playing trumpet for orchestras too numerous to mention.’