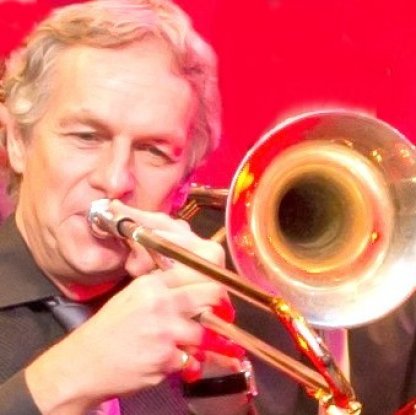 Mike started playing the trombone aged 12 (when his arms were long enough to use the slide!) and taught himself. Since then he has become one of the UK’s leading session trombonists, and a nationally acknowledged trombonist and brass specialist.

Mike is a musical arranger, tutor, writer & performer, and he brings an enormous talent to his compositions and arrangements, not only as a trombone player, but as a hugely experienced musician at the very highest level.

He has numerous TV credits to his name, appearing on shows as diverse as TFI Friday, A Song for Europe, MTV and even the Budweiser adverts. He has played in the Children in Need Studio Orchestra, was Musical Director for the UK’s Song for Europe entry, and played many theatre shows including Jesus Christ Superstar and Chicago, as well as on TV in Vera Drake, To the Manor Born, Miss Marple, The Steve Coogan Show, Shooting Stars and many many more.

Mike has been associated with Holton Instruments; now Leblanc Corp and endorsed their Martin “Urbie Green” model trombone, and has developed a signature model trombone in conjunction with instrument manufacturer London Musical Instruments.