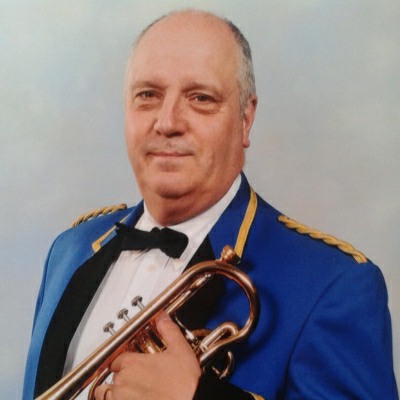 William Hill was born in Ballymoney in Co Antrim and started playing the cornet in primary school at eight years old. He joined the local Old Boys BB band and remained with them until the band folded in 1974, followed by a spell with Coleraine Silver Band.

As well as playing the cornet, he was principal trumpet with the Co Antrim Youth Orchestra and toured with them to Germany, Holland and Gibraltar.

After studying at the Royal Scottish Academy of Music and Drama and the NI Polytechnic, he began a teaching career in music, and he was appointed Head of Music in his current school in 2000 until the present day.

Over the years he has had experience with many various musical ensembles and groups. He played with the 55th Old Boys Band in Belfast and also the Killycoogan Accordion Band, a very successful group, winning major awards both at home and on the mainland.

He has been conductor of the Ballyduff Silver Band since 1987. They have enjoyed success in contests, having won the NIBA Championships, Brass Band League and Brass in Concert on many occasions. They are also in demand as a concert band throughout the year across the province.

Over the years he has arranged many pieces for bands of different types and ability ranges, and now some of these will have the opportunity to be heard by a wider audience.